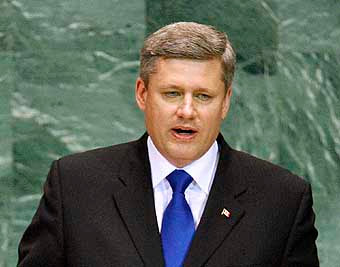 Andrew Coyne writes in Maclean's about the Stephen Harper's leadership style. He mentions that Harper is more or less a one-man cabinet who bullies people within his own party, his opponents, and bureaucrats. I strongly recommend that you read his column and make comments on his Maclean's blog.
I liked the following quote that TVO’s “The Agenda” displayed on screen:

“As we look ahead into the next century, leaders will be those who empower others.”–Bill Gates.

Being a boss where someone tells other people what to do is not the same as being a leader. Leadership requires someone to trust the people who work with him, to let them make important decisions. I don’t see Harper trusting his cabinet, fellow MPs, and the Canadian people. If Harper cannot trust us Canadians, why should we trust Harper with the power of being prime minister? Canadians, including the other party leaders, need to challenge the cult of the bully Harper.
Posted by Skinny Dipper at 7:00 a.m.

After the CA and PCs were united, Harper was faced with herding a bunch of cats into a strong brand political party. It was a mess in the 2004 and 2006 elections because Harper was a weak point man, but luck struck in 2006.

It was probably concluded that the diverse new Conservative party had to be brought under control, because their enemies, the opposition parties plus the biased MSM were ready to pounce on any gaffe .. and God knows there would be gaffes with a new government trying to bring the country and civil service under their governance.

So now all the biased, deviate MSM can do is attack Harper because he is too "controlling". If Harper wins a majority government, I want to see all his past critics in the MSM resign, retire, commit hara kiri.

Re: The hara kiri .. my gift to those in the MSM promoting the Dion Liberals ...