A reformed House of Commons and Senate 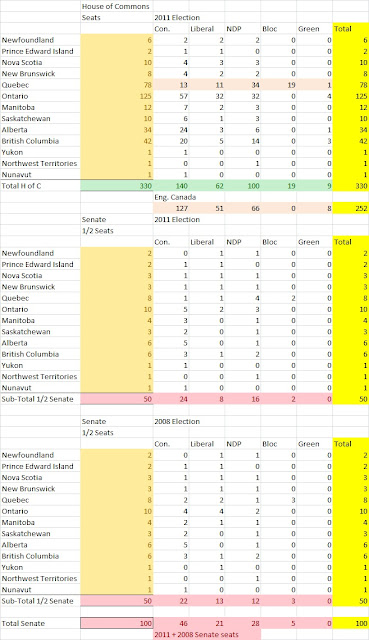 Houze of Commons seats apportioned based on provincial/territorial populations and party seats distributed through some form of proportional representation.

Senate seats apportioned based on the square roots of the provincial/territorial populations and party seats distributed through some form of proportional representation.

Harper will still run the government like a control freak.

Abortion will be slightly tightened, but not banned.  Harper still needs leverage with his religious extremists while not pissing off a majority of Canadians.  Yes, he can get feminists and their immediate supporters upset.  He knows not to get suburban Conservative supporting moms and dads mad at him.

The Bloc will effectively be gone.  Four seats in parliament makes the party the Blip Québécois.  However, separatism will not be dead.  The focus will be at the provincial level.  If Pauline Marois and her Parti Québecois form the next Quebec provincial government, and if Harper imposes laws that upsets Quebeckers, then the threat of separatism could rise again.  Harper will have very few Quebec Conservatives to support federalism.

Elizabeth May may cross the floor to the Liberals.  She will want to influence a liberal leadership race.

The Liberals will pick a young or middle aged leader whose task will be to rejuvenate the Liberal Party by increasing donations and memberships.  Bob Rae will not become the leader.  With the right leader, the Liberals can bounce back to respectable results.

If you have Rogers cable, this might work for early coverage

Turn to a Newfoundland or Nova Scotia TV station before 7:30 Eastern.  Keep the station on after 7:30.  You may get multiple freeze frames.  The results may come in.  Just don't change the channel and return, or else you'll be blacked out.
Posted by Skinny Dipper at 5:54 p.m. 1 comment: