The hidden rules of society

I think Harvard Professor Mr. Henry Louis Gates Jr. understood the hidden rules of society when he was arrested for disorderly conduct by a Cambridge, Massachussets police officer.

Your choice for mayor of Toronto

Who would you like as mayor of Toronto? You may select by using the link above. This is an STV or AV style poll where you get to rank your preferences 1, 2, 3, and so on. The poll is unofficial. If you live outside of Toronto, you may vote in this poll because I can't stop your internet signal from crossing Steeles Avenue into Toronto. If you can vote more than once, again I can't stop you.

I personally think that most refugee applicants to Canada can be processed between 48 to 72 hours (not including weekends and holidays). Here is what I would propose:

When a refugee applicant arrives at an airport or another port of entry, the applicant will be interviewed by an immigration officer who will record all the details provided by the applicant.

If a visitor who has already entered Canada legally decides to apply for refugee status, he/she will have his/her case heard by a two-person refugee board. The refugee applicant will need to convince both members in order to be admitted to Canada as a refugee.

Statistically, it would be better for a person to apply for refugee status as at a port of entry. The odds of receiving refugee status would be 50% as three people would ultimately determine one's status (YYY, YYN, YNY, NYY, YNN, NYN, NNY, NNN). By applying after entry, the applicant will only have a statistical 25% success rate (YY, YN, NY, NN).

An unsuccessful applicant can appeal a board's decision. The applicant will need to remember that he/she may remain or be detain until the appeal has be decided.

At any time an applicant can end a refugee claim and leave Canada voluntarily.

In the case of a Roma from the Czech Republic applying for refugee status, If I were an immigration officer or refugee board member, I would ask the applicant why he or she didn't just move to another Schengen agreement EU country as the international borders are open among Schengen countries. If the applicant could not convince me that he/she would face persecution in the other Schengen countries, I would reject the claim.

I think these steps would help cut down on the number of refugee claims from the Czech Republic and Mexico. We should be able to restore visa-free travel by Czech and Mexican citizens to Canada.
Posted by Skinny Dipper at 10:46 a.m. 2 comments: 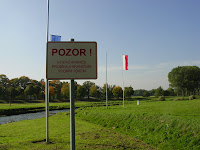 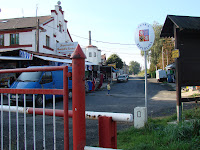 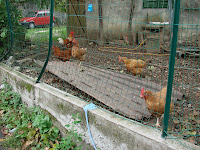 Top photo: Zittau, Germany on far side of the Neisse River. Czech Republic on front left side of ditch. Poland on the right.
Middle photo: Jirikov, Czech Republic on other side of gate. Not seen: Ebersbach, Germany. Watch out for the cigarette cops when returning to Germany.
Lower photo: Evil Italian border guard chickens in Gorizia, Italy. They scratch, then ask questions. Photo taken on the Slovenian side of the fence in Nova Gorica. I thought I would throw in this photo for fun.
Posted by Skinny Dipper at 9:09 p.m. 4 comments: