If you ever wondered what French President Nicolas Sarkozy was like when he was un petit garçon, the movie is being released to the public on September 30 in France. 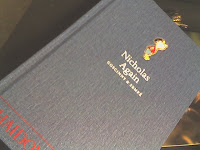 Le Petit Nicolas (Little Nicholas) is a series of books that contain short stories about a fictional boy named Nicolas (Nicholas). The first book was published in 1959.

Below is a trailer of the film, Le Petit Nicolas. No, it is not based on the life of little Nicolas Sarkozy. The kid in the movie seems too sweet.

My son just loves "le petit Nicolas". He's read most of his books. When I showed him this clip, he was ecstatic! That's cool!

I'm very glad your son liked the video clip. I think you can find more on YouTube. I first heard of "Nicolas" when I was travelling throughout Europe in Oct-Nov. 2005. I ended up in Paris in November when the riots took place.

The movie hits the screens in Québec this coming Friday. Follow the link for more info...

Sorry for the moderation. I do have it turned on for my older blog postings. I was getting too much spam. Thanks for the link.

I hope your son will enjoy the movie. It's not showing in Toronto next week.