Agents Skinny and Dipper are toxic 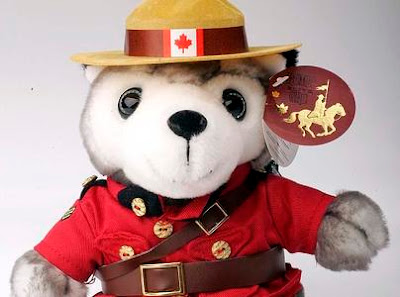 "Health Canada is in the process of issuing a recall for this toy bought at a Pearson airport gift shop, after tests for the Star found lead in its belt. " (Parent Central/Toronto Star)

Now I know why drivers on the road look at me strangely. They just see some "sick guy" licking Agents Skinny and Dipper's belts while driving. Hey! At least I don't text-message while driving.

I did buy Skinny and Dipper at an international slave trade market for stuffed animals at a tourist outlet in Niagara Falls two summers ago. I don't know if I want to return them. They'll be deported back to Moldova after being lured to come to Canada to become casino hosts. Their real names are Scinei and Dipercescu.

Anyway, here is a repeat of Agents Skinny and Dipper waiting for Stephen Harper to come to Toronto during the election campaign.

He's a cute little bear! I want one but Daddy won't let me have one cause its made in China!

It's a conspiracy by the Chinese to make everyone in the world buy cheap crappy plastic dishware, I tell you!