Blogger Christian Conservative writes in blog about a letter-to-the-editor published in the Guelph Mercury. The letter writer scolds campaign supporters of the Liberal candidate for running a negative campaign against Conservative candidate, Gloria Kovach. Based on what Christian Conservative wrote, one would assume that the letter writer is just an average citizen who doesn't like Gloria Kovach being referred as a Harper "sock puppet."

Is the letter writer, Barry Osmond, just an average Guelphite or is he in some way or manner connected to the Conservative Party? You decide.

Here's a past dinner invitation from Barry "average citizen" Osmond and friend: 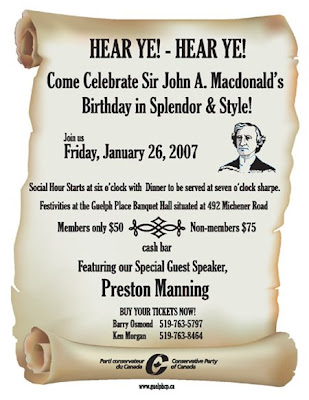 CC wrote that letter to the editor. If you compare his blog posts to the wording in the LTE, it is obvious. This is a one man campaign and the Mercury should be made aware of this manufactured outrage campaign.

I dont know if CC wrote that letter to the Editor, but the letter writer at the very least freely borrowed phrases from CC's one blogpost.

Get screenshots, Skinny. Posts get magically edited at times when stuff liek this is pointed out.

SD and ST, no need to get screenshots, the posts aren't going anywhere... I'm not one of those vanishing blogpost types. ;-)

(though I'll occasionally post an update and/or correction when I do get called out on an error, but I don't delete posts)

Thanks, Christian Conservative. I know you are supporting your candidates in the by-elections. I wish you best of luck.

In general, I enjoy reading both progressive and conservative blogs if the quality of writing and research is good. I do not like reading blogs just from people who agree with me. I like reading blogs that will challenge how I think about the world. Left, centre, or right; Christian, Muslim, Jew, and miscellaneous--I like reading blogs with different points of views. Time for Ezra and Crux. They challenge my thinking.

Agreed SD, I also like reading from all over the spectrum... listening to the same voices all the time turns you into nothing more than a "Yes Man" (or woman as the case may be, to be all PC...), and we already have enough of those around here. ;-)