1968-1969: Two men in Prague remember the Russians. Why Georgia, Ukraine, Moldova, Lithuania, Latvia, and Estonia are against Russia 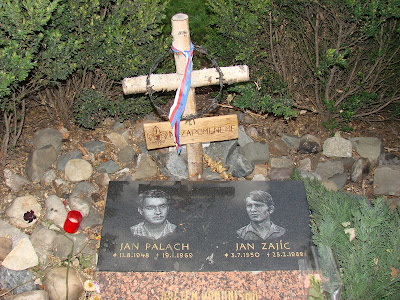 In the photo, one can see a small memorial on display in Wenceslas Square in Prague. This memorial is in honour of two men, Jan Palach and Jan Zajíc, who commited suicide in 1969 to oppose the Soviet (Russian) occupation and repression of their former Czechoslovakia. While this particular memorial is small, it is powerful enough to remind anyone why the peoples from Estonia to Georgia appreciate their hard earned freedom. They do not wish to lose their freedom under present or future Russian occupation and repression.

For further reading: Toronto Sun: The death of Prague Spring by Peter Worthington (August 21, 2008). The link is good for about one week.
Posted by Skinny Dipper at 7:01 a.m.

Wind of the western sea, ，

Wind of the western sea!

Over the rolling waters go,

Come from the dying moon, and blow,

Blow him again to me;

While my little one, while my pretty one, sleeps.

Father will come to thee soon;

Father will come to his babe in the nest,

Silver sails all out of the west

Under the silver moon;

Sleep, my little one, sleep, my pretty one, sleep.