I went the UBC Sauder School of Business Election Stock Market website for Ontario's 2007 election. I made a fancy prediction that 29.2% of Liberal, PC, and NDP voters in the last election decided to vote for the Green Party this time. I also assumed that all "Other" voters became Green supporters. Here's a futuristic newspaper report about a provincial election:

Last night in the province of Antiquatia, the Green Party received more popular support than any other party with 32.6% of the vote. The Liberal were very close to the Greens with 32.5%. The Green Party received 30 out of 107 seats (28.0%). The Liberal Party didn't perform as well as it only received 54 seats (50.5%)--a bare majority. This seat distribution occurred because the voters in Antiquatia massively supported changing to a new voting system called First-Past-the-Post in a referendum held four years ago. Forty percent of the voters approved First-Past-the-Post over the 60% who opposed. 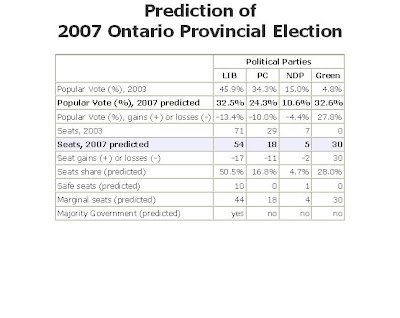