Harper complains that Canadian flags were on the sides

When Stephen Harper answered a question from Ralph Goodale during Question Period, he complained that the Canadian flags were placed on the sides. He is correct. However, there are etiquette rules when displaying the Canadian flag with provincial and territorial flags.
Here is a photo from Maclean's of the three opposition leaders at their accord signing with the flags displayed behind them. Sorry, it is the best photo I could find. 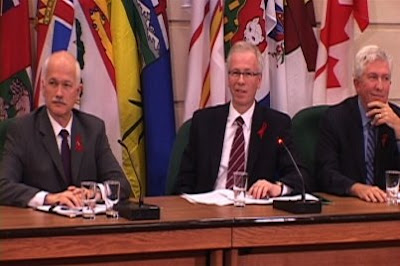 Here is some information and image of how the Canadian, provincial, and territorial flags should be displayed along a wall:

With flags of the Canadian provinces and territories

Display along a wall :

The National Flag of Canada is supposed to be displayed at the front and end (left and right #1's from our view).
Posted by Skinny Dipper at 2:50 p.m.

Hey Skinning Dipper, you are absolutely correct about their being a protocol for displaying the federal, provincial, and territorial flags.

However, your photo is not from the signing ceremony. It is from the press conference after.

The signing ceremony didn't take place in that room. And while there were two flags at the ceremony, they were off to the sides. Usually when I see press conferences at the federal level there is a whole row of Canadian flags behind them. Or, as you correctly pointed out, the federal, provincial, and territorial flags laid out in the correct order.

Always keep in your backpack, a proper set of flags and an operting camcorder.